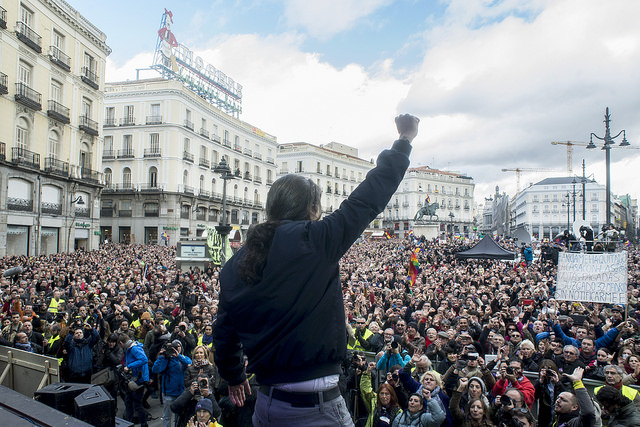 If there’s one common theme that underlines politics across the industrialized world in 2016, it is surely the rise of populist movements into the mainstream. Consider the following developments in Europe and North America over just the last month:

In these countries and several others, the mainstream institutions of political power are facing their most serious challenges, from both the far left and right, since at least the tumultuous changes of the 1960s. A fundamental shift in political discourse and organization seems to be afoot. But how did we get to this point?

But advice and threats from the establishment are ignored in Little England these days. Politicians and economists are the ones who told them the EU – and more broadly, globalization – would make everyone wealthier.” – Mark MacKinnon, on supporters of the UK’s “Leave” Campaign

The rise of populist movements into the halls of power in Europe and North America seems to be taking place nearly overnight. And while some relatively recent events – including shocking terrorist incidents and a catastrophic migration crisis – have contributed to a more extreme discourse, several long-term trends have been chipping away at the key societal structures that have largely maintained order in industrialized societies since the Second World War.

Among many other trends, three key changes seem to be fundamentally re-shaping our political relationships while fanning the flames of populism: 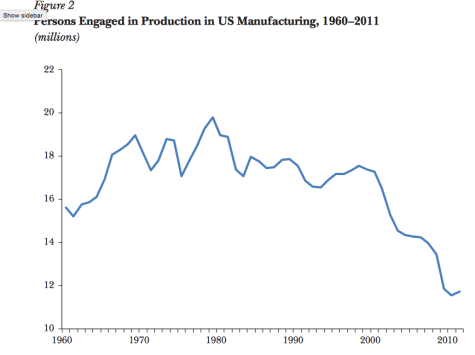 It turns out that statistics show a bit of both factors at play: Manufacturing’s share of the U.S. GDP has actually held steady since the 1960s while the share of jobs has plunged, indicating improved productivity is shrinking the job pool. But, since the year 2000, productivity gains in the manufacturing sector have been no more pronounced than in the rest of the economy, while jobs continued to plummet – suggesting that China’s rise was likely a driving force of manufacturing job losses in industrialized nations over the last 15 years.

In any event, the loss of manufacturing jobs has a significant societal impact. As the Brookings study cites:

The long-term decline in the manufacturing share of employment has meant fewer jobs available at good wages for workers who lack advanced education. The loss of nearly 6 million jobs since 2000 has been damaging to workers who have been laid off, communities that have lost a vital source of employment, and to young workers who might have found jobs in the sector.” (p. 19)

Without a steady manufacturing sector, there are fewer economic opportunities and sources of social mobility for the large portion of society that does not have the resources (including money, access to good schools, and role models) to pursue advanced education. Put another way, the rate of change in industrialized economies has far outpaced the ability of our educational and social support systems to keep up. The lack of economic and social opportunities has been cited equally by Trump supporters on the American far-right, and Podemos supporters on the Spanish far-left, as a main source of grievance against their countries’ “establishment”.

More recently, this shift was solidified during the financial crisis of 2008-2009 as most countries adopted an “austerity” approach, cutting government budgets in order to pay off government debts. The reasons for this shift may have been partly ideology, partly electoral calculus, and (especially in the United States) partly a reflection of banks’ and corporations’ growing roles in politics. The net effect has been that the struggling working classes in most countries no longer have an obvious left-of-centre political party to champion their cause, opening up space for far-left movements, or (in some cases), far-right parties that blame immigration and open borders for their economic troubles.

This suggests a fundamental shift in how citizens gets their news: Rather than relying on institutions such as The New York Times or NBC News to curate content, most information is now viewed on platforms that are curated by personal contacts (who more often than not echo one’s political preferences). And while “shock value” has always been an important part of news media, a revenue model that is centred on the number of clicks encourages the amplification of extreme, “click-bait” views – which over time, perhaps makes these views appear more mainstream than what would traditionally be covered by news media.

Over the coming weeks and months, countries in Western Europe and North America may finally see the tangible outcomes of these long-simmering shifts in political relationships. It remains to be seen whether the rise of populist movements in these countries will ultimately be a flash in the pan; further destabilize political and economic systems; or help bring about a new, lasting political order.

What does the rise of populism portend for the future of politics in Western Europe and North America? Is this a flash in the pan, or does it represent a more lasting shift in how politics is conducted?

One thought on “From Podemos to Trump: Three Changes That Have Fuelled the Rise of Populist Politics”