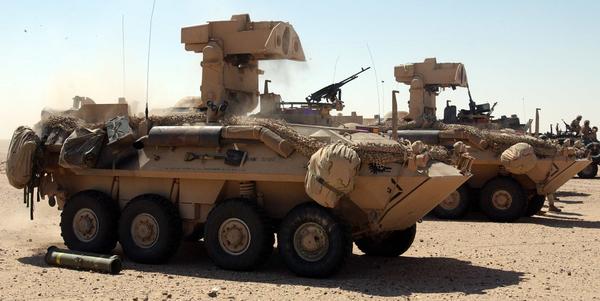 Three months after stepping into power, Canadian Prime Minister Justin Trudeau and his Liberal Party face one of their first major governance controversies, over their continued support of a controversial $15 billion (Cdn) arms deal to Saudi Arabia. The deal represents the largest contract to export manufactured goods in Canadian history, and will employ an estimated 3,000 Canadians for the next 14 years, primarily through the London, Ontario-based contractor General Dynamics. While details on the exact nature of the weapons to be sold were initially murky, Canada’s Globe and Mail newspaper reported last month that it involves light-armoured vehicle (LAV) tanks, equipped with machine gun turrets, that are destined for an elite Saudi internal security unit.

Ever since the deal was announced in 2014 under a Conservative government, it has drawn scrutiny over the fact that Canadian-made or assembled weapons will be supplied directly to a country with a notoriously poor human rights record. In recent years, Saudi troops crossed into neighbouring Bahrain to quash an uprising by Shiite protestors, and a recent UN report accuses the country of “widespread and systemic” targeting of civilians in its year-long air campaign against Shiite Houthi rebels in neighbouring Yemen. The Saudi kingdom has also been criticized for its heavy and brutal use of executions within its borders, including the mass execution of 47 people in early January. 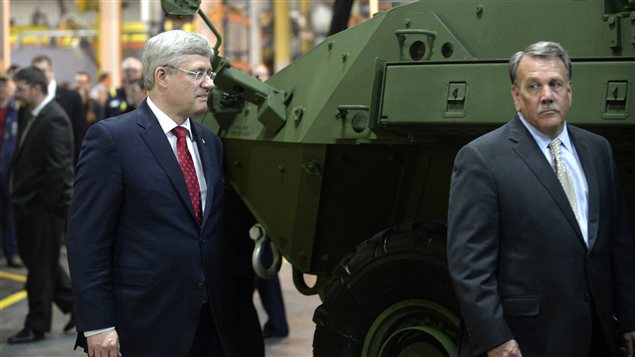 Critics of the Canadian-Saudi arms deal claim there is a high likelihood that the Canadian-supplied LAV tanks will be used against civilians, either within or outside of Saudi borders. In a recent poll, 60 percent of Canadians believe that their country’s arms exports should only go to countries that respect human rights, and even PM Trudeau’s now-chief of staff posted a critique of the arms deal last year, while the Conservative government was still in power. More to the point, Canadian law requires that a review of a potential customer’s human rights record be done prior to completing an arms deal, and shipments are forbidden if there is a chance that the arms could be used against a country’s civilians.

Yet, to date the Liberal government has refused to re-open a discussion on the ethics and legality of the agreement, calling it a “done deal” made by its predecessors. It is unclear whether a human rights review has been completed by Canada’s foreign ministry, and whether it will be made public. And while the government began signalling this week that it may review the Saudi deal in light of any new information, it has also been actively promoting the prospect of military sales to Kuwait, one of Saudi Arabia’s closest allies and a key participant in its campaign in Yemen.

At first glance, it seems perplexing that the new Canadian government would continue supporting an arms deal with Saudi Arabia that was negotiated by its predecessors and political opponents. Justin Trudeau’s Liberal Party was elected on a promise to bring Canada back to the international table as a constructive player in resolving conflicts, harkening back to the middle power role that former Liberal Prime Minister Lester Pearson crafted in the 1960s. In addition to the criticism from Trudeau’s own chief of staff before last year’s election, another Liberal Party stalwart, ex-Foreign Minister Lloyd Axworthy, also went on record last month to publicly criticize the deal, asserting that it doesn’t even align with Canada’s economic and geopolitical self-interests, let alone its humanitarian values. If there was ever a time to wipe the table clean and reset Canadian foreign policy, now – a few months into a new government – would be the ideal opportunity.

The Liberal government’s reluctance to re-open debate on this issue must therefore be explained by factors other than party politics. Specifically, this policy appears to be a good example of the power of “path dependence” in foreign policy. Path dependence is a concept that was initially developed in the field of economics to describe a situation in which the effect of relatively small initial decisions ends up snowballing over time, severely restricting the ability to reverse course down the road, even in light of new information. Put another way, once a decision has been made – intentionally or otherwise – to drive a train down a certain set of tracks, it is very difficult to jump onto another track, even if that alternative track seems to be more desirable down the road.

Path dependence isn’t an important factor for every decision, but it becomes particularly important when other actors in a system make a cascading set of decisions based on the initial decision in question, essentially “locking in” the initial set of assumptions and practices. One such example is the battle between the VHS and Betamax recording devices in the 1980s. While Betamax initially produced a better-quality image, the makers of the VHS (JVC) made the early decision to licence it to any manufacture who wanted to make it, whereas Sony retained the sole rights to manufacture Betamax. Within a few years, multiple companies were making VHS, driving down its cost, which led to more and more consumers purchasing VHS over Betamax, which led to more and more companies producing videos in VHS format, etc. In spite of its somewhat-lower quality, VHS became “locked in” as the dominant recording device.

What does this example have to do with foreign policy? In addition to economics, path dependency can also appear in other fields where systemic forces contribute to locking in initial decisions. In this case, the policy to sell arms to Saudi Arabia reflects at least two sets of early decisions that exhibit powerful “lock-in” effects: Canada’s decision to heavily invest in arms manufacturing, and its decision to counter Iran’s influence in the Middle East.

Regarding the first decision, Canada developed a niche as a manufacturer of weapons sub-components near the end of World War II, and at least 500 Canadian companies (likely more) are supported in some fashion by the industry today. The United States has historically been the Canada’s main customer, but recent cuts in the Pentagon’s budget (approximately 15 percent since 2011) have left Canada scrambling for other buyers in order to support its industry. There aren’t too many peaceful countries that are looking to buy weapons at a scale that fills the gap, leaving the industry’s health dependent on the business of less salient countries, including Saudi Arabia and Kuwait.

Regarding the second decision, Canada’s interests in the Middle East and long-standing alliance with the United States have historically opposed it to the Shiite Iran government since the 1979 revolution (indeed, Canada closed its embassy in 1980). By default, this has meant allying with Sunni regimes in the region, the most powerful of which is Saudi Arabia. Such an alliance involves a cascading set of decisions to deepen political, economic, and military ties, both with Saudi Arabia and its key allies, including Kuwait. Today, Saudi Arabia and Canada are part of a loose coalition of Western and Sunni countries opposing Syria’s government and other Middle Eastern actors who are closely aligned with Iran.

And that is perhaps the more significant effect of path dependence. At a time when Western countries are beginning to normalize ties with Iran, when Saudi Arabia has been funding extremist religious schools that fuel Islamic terrorist groups, and even when Saudi Arabia is a direct economic competitor to Canada in the oil markets, this arms deal is an indication of how difficult it is to “jump the tracks” onto a new foreign policy that better reflects Canada’s interests. And, if the largest arms deal in Canadian history is concluded, it will become that much more difficult and costly to reverse course, should future events warrant such a correction.

Canadian military sales to regions such as the Mideast have risen significantly in the past decade as the former Harper government worked to build up [Canada’s] role as an international arms dealer. Pentagon budget cuts drove the Canadian Commercial Corp. to look further abroad for arms buyers.” – Steven Chase, Globe and Mail

“The Saudi Arms Deal: Why It’s a Big Deal“, by Steven Chase (Globe and Mail)

“Why is Canada Making Arms Deals with the Saudis?” by Michael Petrou (Maclean’s)