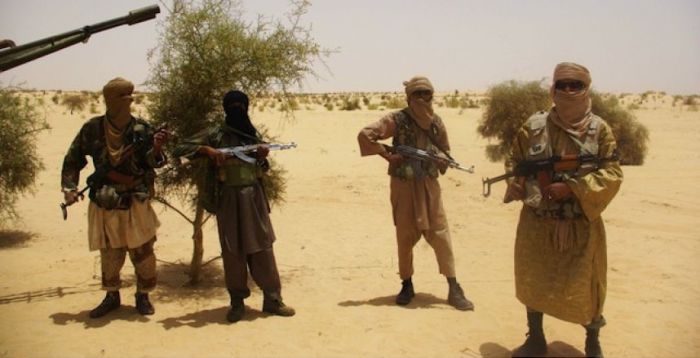 The Nov. 13 attacks in Paris have prompted world leaders to focus on defeating the Islamic State, or Daesh (referred to in this post as ISIS), to a level of determination rarely seen on global issues. The Group of 20 (G20) summit held in Turkey just a week after the events, in which leaders from 20 of the world’s largest economies were to focus on refugees and climate change, was instead consumed by negotiations to form a common front against ISIS. In particular, the presidents of France, the United States, and Russia have led an intensified bombing campaign against ISIS territory in Syria and Iraq (which has already led to a serious international incident, with Turkish forces shooting down a Russian plane that flew over its territory). Meanwhile, many 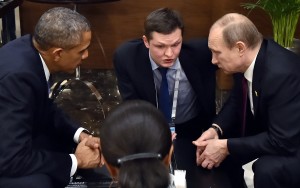 Western countries are already looking at ways to limit immigration to their borders, fearing that potential terrorists will take advantage of the refugee crisis to infiltrate their nations. Reactions have ranged from serious proposals to modify the Schengen Agreement, which allows free movement across most of the European Union; to U.S. presidential candidates proposing to close the border to Muslim refugees; to a delay in the new Canadian government’s commitment to bring in 25,000 refugees before the end of the year.

The dominant beliefs underlying all these responses are that (1) more bombs will destroy ISIS, (2) closing or restricting borders will prevent terrorists from reaching Western borders, and (3) more government surveillance of suspicious groups or individuals will decrease the likelihood of a terrorist attack. Indeed, these three assumptions have formed the core of Western countries’ counter-terrorism strategies since the end of the Cold War; from Russia’s military campaign in Chechnya in the mid-1990s, to the U.S. Patriot Act and war in Iraq after 9/11, to France’s involvement in African counter-terrorism campaigns in the past few years.

Yet, the statistical evidence doesn’t seem to support the effectiveness of these responses, at least in stopping terrorist attacks on a world-wide scale. Since 1970, the University of Maryland has compiled statistics on global terrorist attacks through the Global Terrorism Database. Terrorism events from both domestic and foreign sources are tracked based on information e.g. where they occurred, who carried them out, what weapons were used, and the ultimate number of casualties and fatalities. This is a powerful tool, as it allows the user to explore long-term trends in terrorist attacks, beyond just the latest news headlines. And if you look at the data over several decades, three important trends emerge.

1. Despite the general perception from our hyper-connected world, the number of terrorist attacks in industrialized Western countries (Western Europe and North America) has significantly dropped since the mid-1990s. 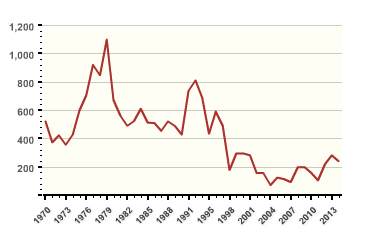 The chart above should prompt us to think more critically about the common narrative that the West is engaged in a looming “clash of civilizations” with radical Islamic terrorist groups. While there have been a few high-profile terrorist incidents since 2001, overall these numbers are much less significant than what Western societies were living with even as recently as the 1990s.

2. Globally, the total number of terrorist attacks peaked briefly in the early 1990s, and again in the late 2000s – and have sky-rocketed since around 2012. 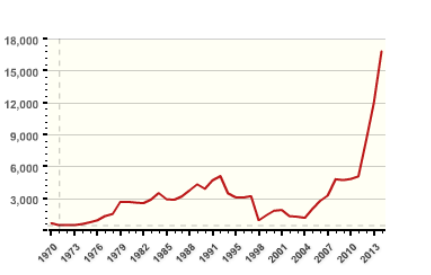 The timing of each set of spikes is interesting. Despite major events that were supposed to significantly reduce violent conflict – the fall of the Soviet Union in the late 1980s, and the U.S. intervention in the Middle East in the mid-2000s – the prevalence of global terrorism has actually trended in the opposite direction. To be even more direct: since approximately 2004, global terrorism has increased sharply at precisely the time where Western countries intensified their bombing in the Middle East (e.g. the U.S.-led intervention in Iraq in 2003, and re-intensified “surge” in 2007), introduced tighter immigration controls (in 2005 in the United States and 2006 in France), and gave more power to state surveillance agencies to track down potential terrorist networks (e.g. the U.S. Patriot Act in 2001). In other words, the policy cocktail that is currently being offered as a way to “destroy” terrorist organizations hardly seems to have been effective over recent history.

3. The recent surge in terrorist activity has spread to multiple parts of the world, beyond the Middle East.

As one might expect, incidents in the Middle East and North Africa (the red line in the chart above) drove spikes in both the early 1990s and late 2000s/early 2010s. But recent years have also seen dramatic increases in attacks located in South Asia (represented above in pink), sub-Saharan Africa (dark green), and Eastern Europe (light green).

The spreading of terrorist activity to other regions of the world in this latest spike suggests that global, systemic forces beyond any one country, conflict, or terrorist group, are driving this increase. While Western leaders are currently focused on destroying the Islamic State in Syria and Iraq, this trend suggests that dedicating billions of dollars and risking thousands of lives in these two countries may not be enough to reverse the rise in global terrorism, even if it does ultimately succeed in reducing ISIS’s powers. After all that effort and sacrifice, militant groups that are establishing roots in other parts of the world could become the next ISIS, perhaps even gaining strength from the leftover pieces if and when ISIS’s centralized organization is dismantled.

In the coming days, I’ll explore a series of potential root causes that have coincided with these spikes in global terrorism, and offer a few policy recommendations that might help counteract these forces. To be sure, the forces behind global terrorism are far more complex than what can be explored in any one blog post, and a military response may be necessary in some instances to curtail imminent and growing terrorist threats. But at a minimum, the statistics from the Global Terrorism Database should at least give pause to world leaders and policymakers who claim that the West is embroiled in a civilizational war with terrorist organizations, and espouse typical solutions that may ultimately be counterproductive to the long-term goal of reducing global terrorism activity.